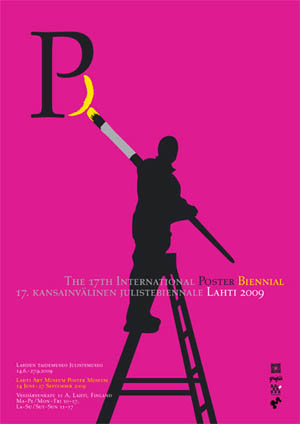 During my summer vacation I did my biennial visit to Lahti Art Musem to see the International Poster Exhibition. There was a couple of really great works, including posters from Iran and Japan.

Really a worth visiting if you happen to be near Lahti, Finland. Still a month to go so chop-chop!

p.s. Poster books of the previous years are sold really cheap at their store!

When art you see, makes you ponder things like ‘What is art?’, ‘Is here just something I don’t get?’, has it already done its purpose? These were my main thoughts of Hannu Karjalainen‘s, the Finnish young artist of the year 2009, works.

This all made me once again think about what is art anyway? If I pour paint on some guy paint, film it and send it to Youtube, is that art? I don’t think so.

So where does the line go? When does something become accepted as art? When it’s in a gallery or in a museum?

Concerning Karjalainen, I’m more thinking about his works made to HD video. Are they more experiments than art? And still; an experiment can be an artistic piece; art can be a result of experimenting. So what am I talking about, then?

Somehow I got same kind of feelings from the videos that I got from Zdzislav Beksinski’s newer works, where he started to play with image manipulation, i.e. doing stuff with Photoshop, and there’s the point where my love for his works ends.

Although in my opinion Karjalainen’s video works are a lot better and mature than Beksinski’s Photoshop images, it comes to mind that are they more towards ‘playing with an idea/a technique’ than towards ‘art’? The answer for this is probably left to those visiting his works.

I think it can be harder to make something considered art on film [not talking about cinema of course], because people see so much movies, television, and the Web is also so dominated with moving images. Everything is blinking everywhere, so when  you go to an art gallery, you somehow have the bucket full already – at least that is how I feel about it.

But the strenght in Karjalainen’s films lay in that; they aren’t speedy or in a hurry: they leave you with a calming feel afterwards. Rare motion imagery does that. My favourite of the videos was ‘Tree’. That one I could put on my own wall to move in its own pace anytime.

One funny thing, not so much about the works, I noticed, was that people commented the video’s a lot louder than the prints. Does the moving image make us more louder, and as we see paintings we whisper?

Some explanation could be that we have the [so called] culture where we gather in front of the television to comment and talk about things we see in it. It seemed [or there was just noisy people this time] like it has transferred to the museum visits too.

I myself happen to like the silence when watching silent films. So, when someone comes jogging to the room [really, with rustling downhill ski trousers ], glances the work, which should last for 4 minutes, for only 10 seconds; makes an awful snorting sound and then runs to the other room to see the next one, I feel my artistic experience has been slightly damaged.

About the digital prints; I liked the pureness of the colors very much and the cheap airline color schemes overall, but about the meanings and impact, well, they remained a bit distant to me. The Lady in Purple [or the Purple Lady, let me be excused for that slight ] was the one that I found the most appealing. Would be nice to what people see in that portrait.

The exhibition is in the Tampere Art Museum from 28.2.–5.4.2009. So if you’re at Tampere in that period, I recommend you to go see it and what you make of it. And please, leave your ski trousers at home.